Earlier this week NASA made it sound like the news of the century when they announced that liquid water had been found on Mars. Here's a few thoughts that's been occupying my mind following that supposed "impact".

Please note: not any circumstances!

For most people this might indeed be a landmark discovery, seemingly unthinkable just a couple of weeks ago. But this discovery was heavily suggested by two different sources 15 years ago, using basically the same type of technique, drawing the same conclusions. I'm talking about a report by Richard C. Hoagland from 2000 and a paper by Efrain Palermo published in 2001. 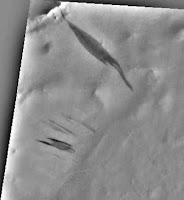 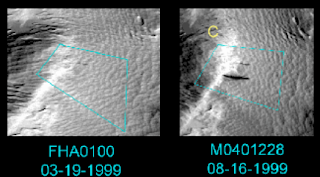 Pictures concluded to show liquid water on Mars - 15 years ago.

Of course, anyone with a pair of powerful binoculars could've seen that Mars has two poles, whereas one of them consists of water ice, thus heavily implying that where that pole ceases and desert takes over, some liquid water probably is to be found.

Anyhow, let's pretend that NASA knew about this before hand (at least Ridley Scott did), why would they chose to proclaim it now? As it turns out the timing is suitable as the premiere for the movie The Martian is just around the corner - a movie that NASA has spent much time and money on, as it turns out. 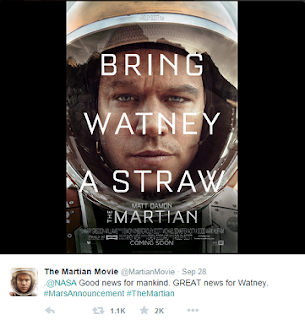 As futile of an announcement as it might seem for many of us who are aware of the world of alternative space research, it shouldn't come as a surprise.

If we look at NASA's history with the red planet, we know for a fact that they deliberately destroyed potential fossilized, organic lifeforms and blatantly been lying to and deceiving us regarding possible artificial structures. 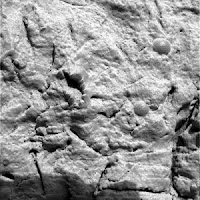 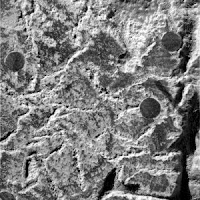 Looking at it from a wider perspective, this do fit with the notion that they indeed are heading for disclosure. If you've followed the Dawn Mission to Ceres you should be familiar with the inexplicable lights which has been discovered on the dwarf planet's surface.

Earlier this year the mystery got a great deal of attention in media all around the world, and NASA even started a poll in which we could all guess as to what was behind the luminescent phenomenon. Is it ice, geyser's, rock or something else? 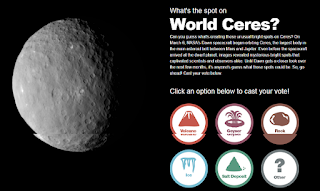 I'm no expert but I can already tell you that we're are not dealing with rocks here. Of course the really detailed pictures has yet to emerge (God knows they have them), but in the meantime let's see how open we are for the unknown.

By the way, they did release pictures of the bright spots being seen even when the planet was turned away from the sun. Effectively eliminating all poll alternatives except for 'other'. So far the agency hasn't bothered with a follow up comment to the pictures, save for this. 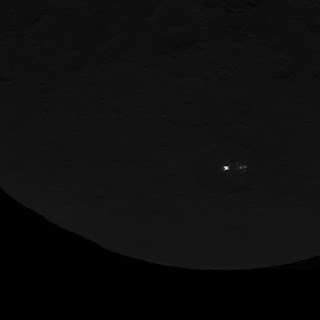 Little by little it looks like they're preparing us for the startling reality: we are not alone, and we've never been alone.

The question is: can you handle it? or rather, is there really anybody out there who can't?