What if a respectable NASA scientist found indisputable proof of the existence of alien lifeforms? And how would we react if one of our Mars rovers came across something that looked suspiciously fossil-like while cruising the red planet?

Dr. Richard B. Hoover spent 46 years of his life working for NASA before he retired in 2011. Astrobiology and extremophiles were his areas of expertise, in which he also made significant discoveries, earning him the title „Inventor of the Year“ by NASA in 1992. Considering Dr. Hoovers impressive merits, you'll have to wonder what's going on when his research is continuously being ignored. Research that no less than three times, has concluded that fossilized microorganisms of non-Earthly origin has been found in fresh meteorites.


In short, he has found fossilized microorganisms in meteorites that we know for a fact hit Earth  within the last 200 years. The fossilized samples in these space rocks lack any trace of oxygen, a process that takes many hundreds of thousands of years to happen. His findings therefore suggests that the specimens are ancient (not from here) and definitively not a result of contamination.

In spite of these highly scientific evidence, he is being widely criticized by his peers who insists that some form of Earthly contamination must have occurred [sic]. NASA on the other hand are playing the Kafka card saying that nothing can be taken into account before a certain level of peer reviewing has taken place - peer reviewing which no one are willing to do.

But where could these fossils come from? As it turns out, Mars is a good candidate. Our rover Opportunity did indeed 2004 find some very suggestive irregularities on one of it's many rock encounters. Irregularities with a strong resemblance to crinoids, and would probably also be interpreted as such, were they found on Earth. 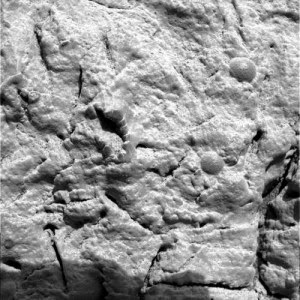 Unfortunately all we can do is speculate, since they only lasted for approximately 3.5 hours before someone in a NASA control room decided that they should all be sanded down to dust.

Dr. Hoover probably isn't alone in questioning the bizarre decision-making. Just imagine an archaeologist reaching for a hammer and smash the newly found discovery to pieces as soon as she laid her hands on it. The logic simply doesn't add up. 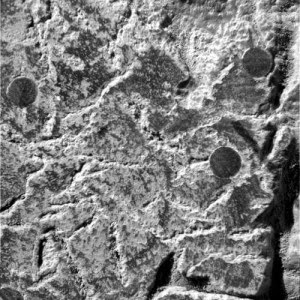 3,5 hours after the spectacular find the three potential candidates were literally turned to dust.

Hardly eyebrow raising, NASA chooses silence when called into question. Dr. Hoover however claims that an unofficial explanation was given to him by a colleague who stated that they were looking for remnants of coal in order to ensure that they were fossils. But why look for coal traces when [according to the video] it's not necessary to determine whether they are fossils or not? And even if this was the case it certainly seems rather drastic to settle for this method knowing the samples would be forever annihilated in the process.

Personally I don't see any good reason to doubt Dr. Richard B. Hoovers research and of course have to concur to the fact that other non-Earthly life indeed is a reality. However, what I find even more intriguing is the insinuation that there appears to be forces that not only oppose the idea of other-wordly life, but actively suppress it, regardless of the increasing amount of good data that favors a living cosmos.
Eingestellt von Klas Häger um 21:46