The Implications of the UFO Phenomenon (II)

Picture yourself the following scenario:

It's a beautiful summer afternoon and you and a few friends are out in the garden enjoying a barbecue. As the sun is starting to set one of you spots a strange object in the sky, at first none of you is making too much of a fuzz about it, but as it gets closer you all realize that something's not right. First of all it's not making any sound and when it suddenly stops as it gets right above you, it becomes evident that the thing is huge, approximately 300 meters in diameter. You continue to observe how the craft is rotating counter clockwise as pulsating white lights emanates from it. After a couple of minutes it suddenly splits up into four separate crafts, taking off with immense speed in the four cardinal directions: north, south, west and east respectively.

This story actually represents what a witness claims happened to her and a group of friends on a spring evening in 1976. The first hand report is posted on NUFORC, and was brought to my attention through Richard Dolan's book UFO's for the 21st Century Mind*. Whatever the origin of the observed object, it is probably safe to assume that it didn't run on gasoline, but rather something more sophisticated. Something clean and tremendously more effective.


What the consequences would be for humanity if this kind of technology became available in some way or another, depends heavily upon the circumstances of which it would be obtained. If it was revealed to us on a grand mainstream scale, we're likely talking about a great positive transformation, which would eliminate the petroleum industry over night, and in a very foreseeable future, poverty as well - given that we are talking about free energy. 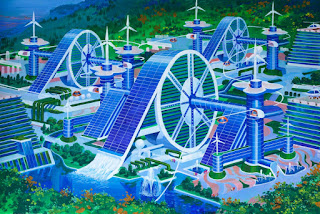 Is a clean, green future within our grasp?

However, if the information was only to be harvested by a smaller, controlled portion of humanity, it's not as likely to benefit the masses, but would instead lead to the creation of a separate elite group - a scenario which might very well be reality, as we shall see.

I believe there are several ways for the later to occur, one brilliant mind in the wrong (or right, depending on how you look at it) place at the wrong time would be enough. For example: there exist a rumor that Nikola Tesla's apartment was raided shortly after his death and that a huge portion of his private notes disappeared. If those papers contained enough crucial data I believe they definitively could've gotten the the ball rolling**.

Richard Dolan has often times speculated that UFO crash retrievals are very potent candidates in this regard, and I agree. There are many cases of suspected UFO crashes, but for familiarity's sake let's use Roswell as an example in this thought experiment***.


The year is 1947 and the world is still shaken from the after math of WW2: millions of lives have been lost, cities have been turned to dust and the two most powerful nations on Earth are busy with a new ordeal which will be known as the Cold War.

As if this wasn't enough, in comes a report describing how an exotic craft of some kind have crashed in the very vicinity of where the first atomic bombs were produced and tested. The media is already all over it and witnesses are lining up to give interviews of what they saw. - "... Mr. President?"

Looking back at the historical context the decision to momentarily put the lid on the affair is perfectly understandable. Not only were they spared from the surrounding world's countless questions, which they probably weren't able to answer anyway, but it also gave them an opportunity to study the new found treasures in peace and quiet.

The wreckage is transported to a secret military location as the PR department makes sure the official story changes course to something of a more mundane nature. Even though some of the brightest brains of the time are working on the project, it likely takes years before anything substantial can be reproduced from it. Perhaps a few of the discoveries deliberately get leaked through industrial channels, as Lt. Philip J. Corso suggested in his book The Day after Roswell, stuff like fiber optics, Kevlar and laser. Some findings stay secret.

As the years go by the project is likely to be phased out to the private sector, where the money, security and know-how are far superior.


One day a break through is made, the scientists involved actually figure out the principle behind the craft's gravitational shielding, and it turns out that the very same principle can be used in a way that lets you use the Earth's magnetic field as a hyper effective energy source for travelling. The profane effect this discovery would have on humanity, if it was to be disclosed, is not underestimated.

This video from Nellis Test Range (Groom Lake/Area 51) was leaked in the mid-90's. The footage is authentic and assumably portrays one of our own crafts, developed by T. Townsend Brown's Electrogravitics (?). Please note the striking resemblance to the recently leaked Homeland Security footage from  earlier this month.


They keep it under wraps. Now imagine if something similar took place say 60 years ago, where would this research be today? Would it be far-fetched to talk about time travel or worm hole-type of commutation? Could they already be visiting other planets or even star systems?

In all cases, we are dealing with a technological level so far off from anything that's out in the public that the selected group of people who have it to their disposal must be seen as a unique branch of human civilization. A breakaway group that have a unique access to Earth and the solar system, a refined infra-structure both on and off planet and most certainly a cosmological understanding that gives them a more sophisticated viewpoint as to the nature of this world.**** 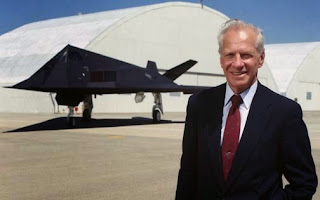 The former head of Skunk Works' Ben Rich posing in front of a F-117A Nighthawk.

A lot of speculation perhaps, but as it turns out there are more to this than most suspect. For example a number of prominent people in key positions have gone on record with sensitive information highly suggestive of exactly this, namely: Leonard Stringfield, Barry Goldwater, Dr. Robert Sarbacher, Dr. Eric Walker, Don Phillips and Ben Rich, the head of Lockheed's Skunk Works-division 1975-91, who at the end of his life made some remarkable statements such as:

“We already have the means to travel among the stars, but these technologies are locked up in black projects, and it would take an act of God to ever get them out to benefit humanity. Anything you can imagine, we already know how to do.”


Regardless of the truth, I'm wildly intrigued by the thought that there might exist a part of humanity that recently in our history took a step into a new, revolutionary paradigm. When it all comes down to it, there are people in the Amazon that are unknowing of our civilization, and who's to say that we are on the very far end of the spectrum? Unfortunately we have to wait for the day they decide to disclose themselves before we can know for sure.

May that day come soon. 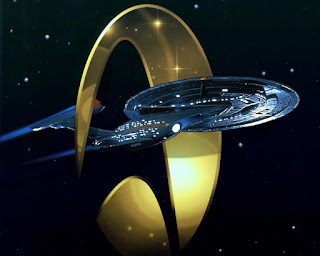 The implications of the UFO-phenomenon (I)

One of my greatest reading experiences last year was Richard Dolan's UFO’s for the 21st Century Mind. The book works as a historical summary of the whole phenomenon: from ancient astronauts to the most popular clips on YouTube, and absolutely everything in between. It's easy to see that a great deal of solid research went into this publication and even if I consider myself fairly well versed when it comes to the history of UFOs, the accessible language and pleasant layout made it a joy to acquaint and re-acquaint myself with all the people, cases and events that constitute the vibrant world of this particular topic.

Instead of writing a mere review of it I would like to address two key questions that Dolan touches upon, both of which I find important, intriguing and highly relevant to us, particularly in these times. In this post (part I) I will try my best to convey what I think is the single most important notion that the UFO-phenomenon entails; one that should always be with us but is too often forgotten.

The total amount of witness reports concerning unidentified aerial phenomena throughout our history is immense. Every year over 10 000 observations are being documented through various organizations in North America alone*. Of course most of them are miss-identifications of man-made or natural objects; but that small percentage of bizarre and mystifying experiences reported by both civilian and governmental/military channels never ceases to exist.

Reports describing intelligently maneuvered crafts slicing through the sky in zickzack patterns, doing thousands of km/h, pulsating in glorious colors without making a sound - often times affecting electronic equipment, moving in and out of water with ease, containing passengers not entirely human looking. What are we suppose to make of reports of this kind?

Perhaps not too much. It's enough to apply basic rational thinking in order to realize that we are dealing with something absolutely real here, the sheer amount of credible sightings speaks for itself. Taking into account other kinds of documentation like physical traces, radar readings and a wealth of photos and videos, there can be little room for doubt that these intelligent units, in some sense, also share our immediate reality. 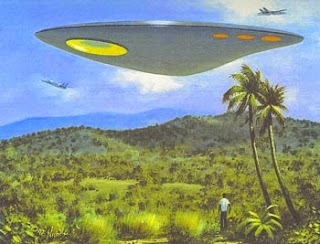 James Nichols interpretation of a UFO-incident in Puerto Rico 1988. Many witnesses continued to observe how the craft split up in two triangular parts which disappeared with tremendous speed.

Yet, everyone, skeptics and believers alike, can't let go of the vacuous idea that something tangible and reproducible is necessary in order to completely convince; as if a piece of film, body tissue or an exotic rod would possibly make any difference. Not to mention the extent of foul play that's been associated with our approach to the phenomenon from the very get-go. On behalf of the visitors, let's not forget the obvious reluctance to provide us with such as well.

Mystery is the common denominator. The essence of the play.

Seeing as the source(s) behind it seem(-s) to be far more sophisticated than us; it's completely uncertain if it's even within our grasp to solve the riddle. Evidently the scientific method has it's limitations, but it's enough to look at dreams, emotions and experiences to establish that. However, we can't blame ourselves as easily when scrutinizing the full width of the UFO mystery and its doings.

With the acceptance of the latter we have to recognize our own restrictions, admit our minds defeat against a World of uncertainty and wonder. 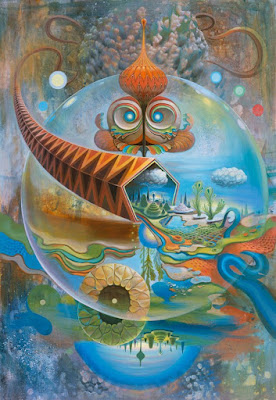