Back in 2016, I wrote a Swedish blog post in which I addressed the severe lack of philosophical competence in modern science, and as the Nobel Prize in physics 2020 demonstrated, the situation, unfortunately, hasn't improved much in the last five years.

Out of curiosity I read through the 21 page background paper, by the Royal Swedish Academy of Sciences. As I have already invested a lot of time* digging into the chicanery going on in particle physics and cosmology, it didn't come as a surprise that the powers that be continues to re-enforce the model which has been promoted for almost a hundred years.

The prize was split: one part going to two astronomers for cosmological observations, and one part going to Roger Penrose, for, as the Nobel Prize committee put it: "the discovery that black hole formation is a robust prediction of the general theory of relativity"

In this post I'm going to focus on the philosophical aspects of Mr. Penrose's theoretical discoveries. The so called Penrose diagrams, together with certain paragraphs from the committees paper, will serve as the objects of interest.

My conclusions will also serve as fodder for a deeper critique concerning the intellectual and existential prison brought upon us by the old world of classic European imperialism.

I will now quote text and pictures from the paper followed by my own comments. 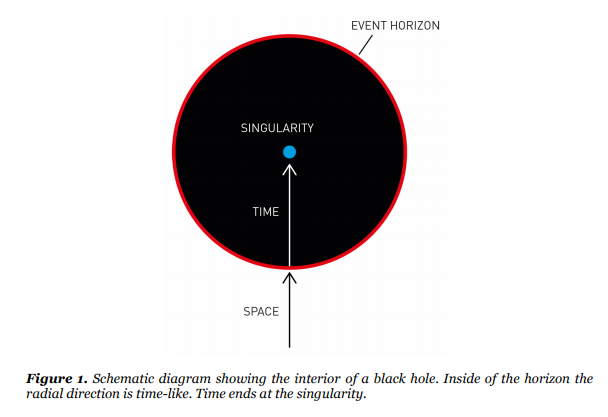 Comment: I mentioned in my post The Hole Story, that the concept of time as well as space are both abstract ideas, which to this date have no physical definition. One can ascribe them a number and put them into an equation, but as they are not physically understood, one has to wonder how meaningful a term like [fabric of space-time] is, and how one can be sure that they (time, space) can exist independently of each other, as depicted in above diagram. The term [singularity] is also not clearly defined in any tangible sense.
Please note the description "Inside [...] the radial direction is time-like".
Q: Exactly what is time-like?
Comment: "The study of curved space-times" ... One has to wonder as to the nature of this research. Not only do they study the bendable aspects of an abstract, but they're also certain that there are many of these space-time-fabrics; which by the way, the diagram/figure above fails to consider, as it clearly shows space and time as existing separate from each other.
Worth noting is the spear-like form of the singularity, and of course the intriguing phenomenon referred to as [trapped surface]**

Comment: My favorite for last. Now take a good look at this diagram and contemplate just for a minute the definition of the term [past] and [future]. The simplest way to explain them is: set of events happening before or after a certain point in time. This means that both of them have an end and/or starting point.

Q: How can one in any meaningful way talk about an infinite finite set of events?

One could just as well make the case for sweet salt or dry rain. The absurdity of it all only gets underlined by the illustration, showing both infinites as finite lines.

Q: How do you distinguish two infinite measures of time from each other and where does infinite present fit into the diagram?

Before moving on, here's the last sentence of the paper in question. I urge you to read it slowly and think about it for a moment.

If you feel the first sentence is opaque, here it is, in plain English:

How much A actually match the predictions of B is unknown.

This implies that the predictions of B are murky and that even though they award a Nobel Prize for A matches B, they admit that, in the end, it could be of insignificant importance, further accentuating the limited practical aspects of the discovery.

In regards to the last sentence: Very humble indeed. 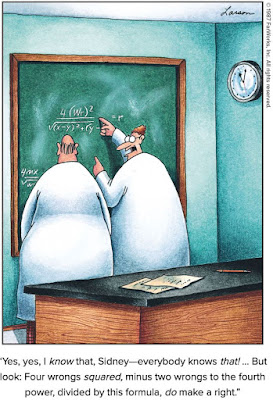 So how come there's no reaction from philosophers and physicists alike? How come they get away with murder? I would speculate that the problem is a deeply rooted cultural one, in which we (mainly modern western society) have been conditioned to think of time in a very specific way, mainly: that it can exist as a separate object and that it is linear with pre-, now and post-qualities - perhaps that it even has a direction.

Because we are so used to think of time in this way, we accept the ideas above, as we think we grasp the gist of them. Or so we fool ourselves to think. Because if one's understanding is fundamentally flawed, everything that follows will inevitably be contaminated.

In reality, this way of thinking about time is very new. Following the enlightenment and the deconstruction of the grand Cosmos as nothing more than a gigantic clockwork. In the spirit of that era, the British empire invented Greenwich Mean Time in 1675, which still serves as the standard reference time globally.

Imagine Sumerian or Aboriginal culture concocting something similar ...  To give some extra food for thought I'm going to give a last example of a completely unrelated field that has been compromised because of  this messed up notion.
Our current environmental narrative tells us that we are (almost) out of time if we want to preserve some fuzzy ideal state of being for our planet as we head into the coming ages.
Hardly do many realize that by stipulating it in this way, we apply our artificial time concept on nature itself, which in turn becomes, in our confused understanding, an object of far lesser eminence than what is due.

Regardless of the man-made mechanisms actual effect on our heavenly sphere - the framework in which we view the problem, obfuscates most if not all positive potential to the outcome. Climate doesn't have an ultimate way of being; in fact, we can safely deduce from looking at the Earths history, that climate is ever changing and cyclical in nature. In every moment unique.

There is no secret that not only the ancients, but many humans of today, has viewed and continues to view time in a very similar fashion. In this light our present time conception looks more and more - to paraphrase the author and thinker Gordon White - like a bad spell.

With this in mind - not to mention being obsessed by what we have done and what we should do - there's no wonder we are stuck in a state of junk science, reckless solutionism and, ultimately, spiritual inertia.

* The Hole Story, Cause for Con[CERN], The Big Sham,
** According to Wikipedia "They are spacelike surfaces (topological spheres, tubes, etc.) with restricted bounds, their area tending to decrease locally along any possible future direction and with a dual definition with respect to the past."
Sources:
Picture 1: p. 5 (19), https://www.nobelprize.org/uploads/2020/10/advanced-physicsprize2020.pdf
Picture 2: p. 6 (19), as above
Picutre 3: p. 7 (19), aa
Picture 4 (Quote): p. 16 (19), aa
Picture 5: From Gary Larson’s The Far Side compilation “Hands Off My Bunsen Burner”
Picture 6: Part from https://upload.wikimedia.org/wikipedia/commons/8/88/World_Time_Zones_Map.png
Disclaimer: I would like to point out that my lack of academic experience gives me close to no credibility in these matters. However, because I have no credibility to worry about, I am also free to give my humble critique without hesitation, and from a unique, and dare I say it, untainted, outside perspective. I would also like to mention that I in no way disregard mathematics as a potent and valuable tool. It works quite excellent as a descriptive discipline, but it is heavily limited when it comes to explanation.
Eingestellt von Klas Häger um 20:40