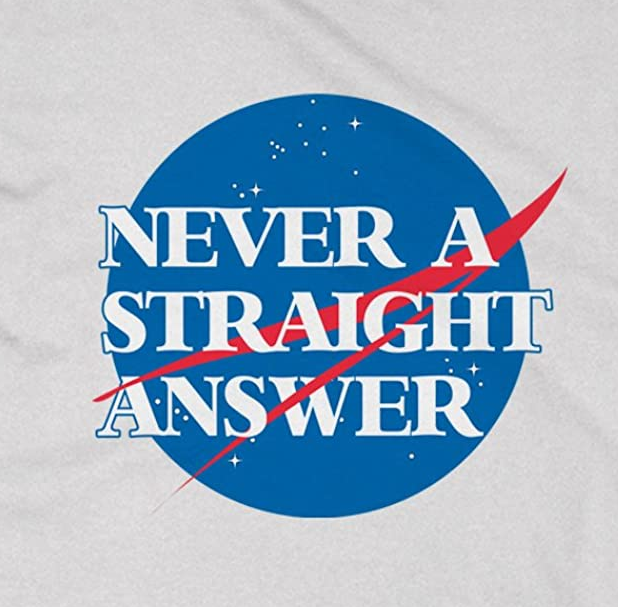 In a day and age were everybody and his mother are wearing NASA T-Shirts - living in a European metropolis I see them more or less daily on every body from nerdy kids to grandmas - wouldn't it be reasonable to stop for a minute and ask ourselves, 'What kind of agency is this anyway?'.

I think so, and because nobody else seems to care, I feel obliged to share my thoughts on what I feel is anything but an honorable association. Frankly, I don't care for NASA at all; in fact, my blood starts to boil every time I see someone who unsuspectingly do free PR for them as they prance around in their €1 Primark shirt.

Why? You might ask. I will tell you why. Rest assured, there are reasons a plenty (besides cancelling the Moon program or making a high ranking ex-Nazi their spokesperson) to cause certain caution whenever the logo shows up; however, the following five are the most egregious.

Back in 1977, NASA came to the conclusion that the satellites Voyager 1 and 2, both destined for the outer reaches of our Solar system, should carry with them a couple of LPs featuring the sounds of planet Earth. So they gave a team the task of putting together a music playlist that would be inscribed on one of the records. Needless to say, the selection could've been more varied. Especially considering it was the late 70's. 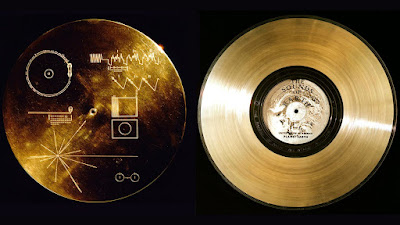 I really can't quarrel about the traditional folk representation, but as far as the rest goes a good third of the tracks is western classical music, Beethoven even gets two tracks and Bach three (!). Of course, the whole thing was never meant to be taken seriously, predominantly serving as a PR stunt, but it still jerks me that the only tracks that wasn't in the classical or indigenous folk genre, was Johnny B. Goode, a blues and a jazz track.

Yeah yeah, royalties and whatnot, but I mean, come on, throw some Kraftwerk or King Crismson on that b ...

The year was 1976 and the Viking 1 probe had just completed a lap around Mars. NASA held a press conference showcasing its progress, in which they presented an image containing a stone mesa eerily reminiscent of a humanoid face.

They laughed it off as a trick of shadow and light, blaming the particular positions of the sun and the probe during the time the picture was taken. They even claimed to have another photo supporting their explanation. But they didn't show it, because it didn't exist.

Several years later, two guys stumble upon a second photo that was taken a month after the first one, showing the same features, despite a change of conditions. (For more detailed info about the Face, check out this article I wrote a few years back)

Cydonia is the name of the region in which the possible monument is situated. A closer look at topographic photos from the area shows several interesting geographical objects in close proximity to the face. Among the more interesting ones are the two 5-sided "pyramids".

Anyway, there was good reason to get excited, as the plan was to land the Viking 2 module in Cydonia not too long after. Unfortunately someone deemed the landing spot too risky and therefore changed it to a place far away. 50 years and a truckload of rovers later, not a single one has even tried to check it out.

When I tell people that we have lost the technology to go to the Moon, they roll their eyes and go on to explain that the reason we haven't gone back since the early 70's, is simply because it was too expensive. Assuming this being true, it merely explains why we stopped going.

However, the fact of the matter is that public announcements have confirmed that the tech used by the Apollo missions indeed has been lost. Meaning that even if we wanted to recreate the space shuttles used by Armstrong and Co., we couldn't.

This wouldn't be so noteworthy, if our space faring tech was just as good, if not considerably better, today. But it isn't even close. And I would need to see a lot more, than billionaires pretending that the mid-layer of our atmosphere is outer cosmos, until I'm convinced that the know-how hasn't disappeared a long with the nuts and bolts.

As if that wasn't enough, the original Apollo 11 telemetry tapes, i.e. the raw Moon footage Houston got before transmitting it to the world, doesn't exist anymore. According to themselves it was erased or taped over.

In this extremely convoluted article on NASA's official website, called Not-Unsolved Mysteries: The Lost Apollo 11 Tapes, they give the impression that all is fine, nothing is amiss; though if one reads it carefully, they

i) do admit that they lost the original tapes.

ii) but they found footage in a CBS News archive showing what Houston transmitted, ergo

iii) no Moon footage has been lost.

thus spinning the original query into something else, then pretending that a solution has been satisfactory given. Alas, the proof is in the pudding. According to this report, called: The Apollo 11 Telemetry Data Recordings: A Final Report (again, from their own website) they state:

No? Arguably the most significant video data in history ... Gone...
Can you really blame people for questioning if we ever went there?

One of the main arguments for sending unmanned vehicles to Mars has always been to look for clues that might tell us if life once existed there. That's the reason why many of the rovers have been placed on what's suspected to be dried out lake beds and such - because as the story goes, the first life forms on Earth manifested in water.

Potential megalithic structures aside, one would think that fossilized algae or other rudimentary organisms would qualify as highly interesting to any of the robo-missions.

One would think that the following photo (Sol 034), taken by the Opportunity rover in 2004, on a rock with what appears to be crinoids, would spark some kind of cautious examination.

I mean, if they were really serious about this 'looking for signs of life' business ...

Instead, they activated Opportunity's Rock Abrasion Tool (a.k.a. RAT), so that they could grind down every single trace of the formations. Taking into account that the RAT is very slow, and the fact that the post-pictures were taken approximately 3,5 hours after the first ones, one have to conclude that they didn't waste any time before getting down to business.

In the screenshot above, once again taken from NASA, the mission is clearly stated. When looking at the official results, Opportunity only gets credit for finding "signs of water and conditions for life". 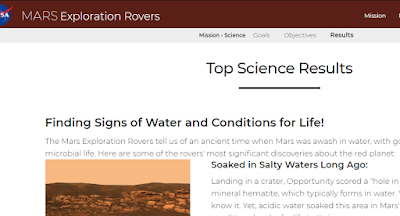 It's clear that the Opportunity Sol 034 images tell a different story: either of suppression of evidence, or grave incompetence. Regardless of which, because of the RAT farce, possible alien fossils accompanied by a considerable amount of NASA's credibility, went up in smoke.

1. Perseverance, Ingenuity and Variations on a Theme

The latest addition in the line of Mars rovers was put there earlier this year, it's called Perseverance and in one of my favorite clips of 2021 you can see how the agency collaborated with newly elected Biden, for this hilarious PR stunt.

Anyway, this rover has landed nearby what scientists have concluded must be a dried out river bed (surprise...), and therefore a great spot to look for traces of ancient martian life. It goes without saying that they once again managed to chose a landing spot not even close to Cydonia.

This time its not only bigger, but comes with a slightly higher resolution camera than the previous models, and its very own drone, called Ingenuity (which by the way has a price tag of 80 million USD). Since its take off it has been busy sending us weekly in flight videos looking like this:

Keeping in mind the previous points made in this post (#2 and #4 in particular), when videos like See Perseverance's latest rover tracks & Mars 'litter' pics or Sounds of driving on Mars! Perseverance makes first-ever recording pop up in my feed, I can't help but to shake my head at how low the level is. And to top it all off, people get all flabbergasted by this dog and pony show.
Because when it comes down to it, that's what it is. Nothing more than lame distractions. Sure, I won't deny the technical expertise that fodders these type of missions. Surely the engineering teams deserve their fair share of respect. Then again, this isn't about the technology per se, instead it's about the latest of a long line of rovers on Mars, which so far has done nothing that the others didn't do, i.e. taking pictures of sand ... and rocks.

No matter how much they try to hype up the extreme importance of these missions (mostly through arguments regarding future human colonization or insight into how life arose on Earth), the curriculum is there for everybody to see, and so far it hasn't produced anything even remotely overwhelming. At least not to the public.
Just look at this list of "Top Science Findings" they present. Water (rather "signs of Water") is listed three times! Even four if you count "Right Conditions for Life" which is all about water as well. I mean really, haven't the space probes already confirmed all of the below and more since decades back?

Judging from the latest NASA Goddard Youtube-uploads [link1][link2], which are all about the agency's crucial role in monitoring crop production - as if humankind hasn't been fully competent the last ten thousand years give or take - it's easy to get the impression they are exceptionally important.
Kind of like when Volkswagen used the slogan "We Drive Diversity" at the UEFA EURO this summer. Is it really true though, or are we just victims of dynamic marketing strategies?

The bottom line is, that at the time of this writing the biggest thing in space travel are private billionaires who can't even leave the upper atmosphere and remote controlled robots producing an endless stream of rock pictures. Considering we supposedly had people walking the Moon's surface 50 years ago, NASA's main course at the moment is under cooked technological de-evolution, served with a side dish of stone cold deceit.

And that, ladies and gentlemen, sucks.