The Curious Case of Dean Fagerstrom

Channeling is the controversial occurrence in which a human uses her body as an instrument for communication with intelligences of the other worldly kind. The communication may express itself in different ways, the most common of them being through speech although this is not always the case, as we shall soon see when we take a closer look at one of the most intriguing channeling cases of our time – The Fagerstrom Case.


During the 80's renowned ufo researcher Philip J. Imbrogno decided to look into the phenomenon of channeling. With a skeptical mind set he examined about 40 cases, meeting every one of the alleged channelers personally. His investigations concluded that at least 90% of them could be ruled out as unsubstantial at best. The remaining few, however, had certain perplexing qualities to them which couldn't easily be discarded. 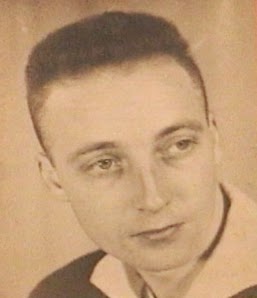 Dean Fagerstrom back in the days.

The year is 1982 when legendary J. Allen Hynek, a pioneer in the ufo world and (in)famous for creating the swampgas meme, suggests that Imbrogno should visit a man namned Dean Fagerstrom (DF): a Vietnam vet who among other things were active in intelligence for 11 years during his military career.

At the time he's residing in a simple home in Putnam Lake, NY. Apparently he's been experiencing weird things throughout his life. The researcher's first impression of DF is that he's both intelligent and articulate, although a distinct down to earth attitude is also noticed, him holding a can of beer in one hand, a cigarette in the other.

Anyhow, they're both standing there small talking when DF all of a sudden feels the urge to pull out a bunch of papers from a drawer, which he subsequently hands over to Imbrogno. According to him, a higher intelligence of the name “Donestra” signalled that it's time for these papers to be known to the world. It's the first time they see the light of day in almost 15 years. 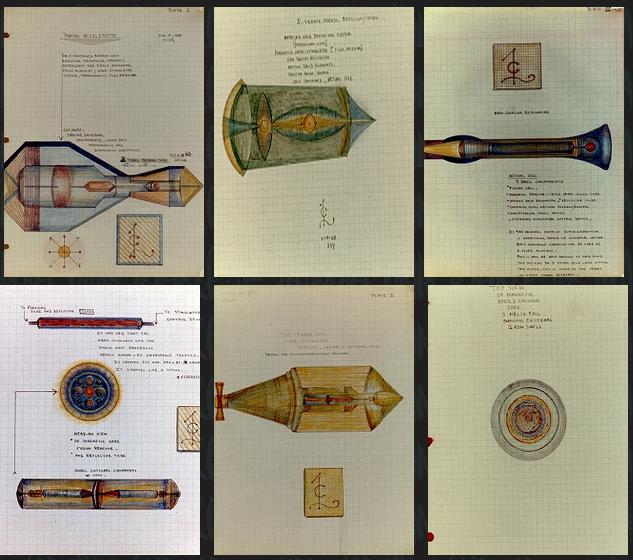 The first 6 drawings – numbering over 30 in total. Check the links at the bottom for more of them.

The papers contain complex diagrams of technical principles and constructions. This is a summary of Fagerstrom's story regarding their origin: it's the 19th of January, 1968. He wakes up in the middle of the night and sees an object floating in front him, it looks like an old fashioned microphone. A pointy object emerges from it, stopping just in front of his forehead. Suddenly his whole body starts to vibrate, and before he knows it he blacks out.

When waking up the following day, he's in a trance like state. He gets in his car and drives to the nearest store and acquires some office supplies, pens and papers etc.. Then he drives home and more or less isolates himself in a room for 72 hours, creating these engaging sketches solely by hand – a most remarkable task if true, as the geometrical precision in them is flawless. 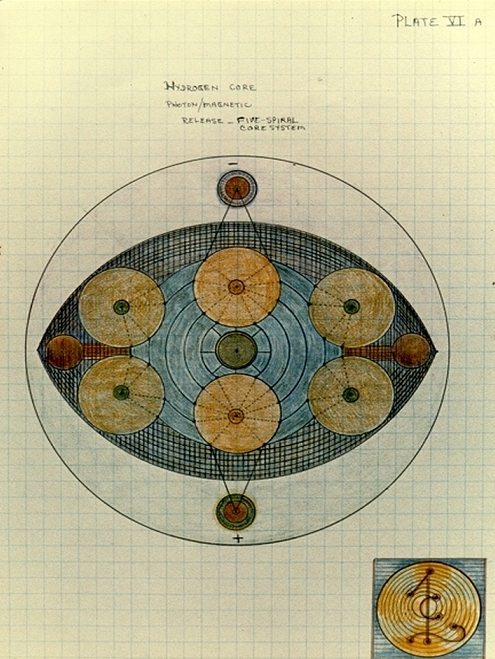 The core of a helium atom 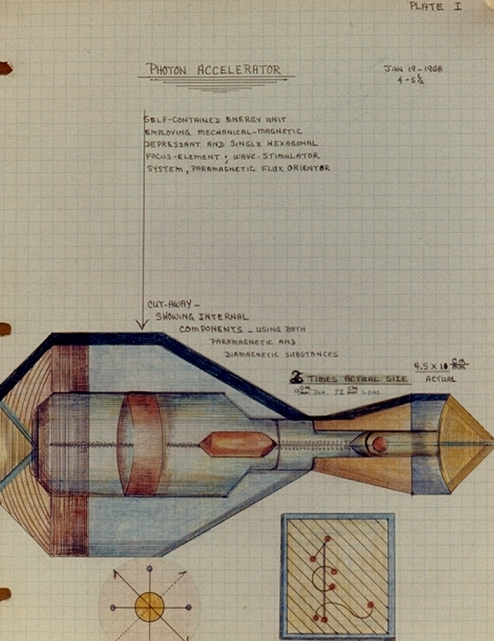 A photon accelerator is to be found among the various blueprints, quite splashy considering this was in 1968.

The pictures have been object of great interest from many a professional eye, ranging from physicists to drafters; some voices insisting on at least 20 years of experience in both fields for these to be conceived.

Due to the blueprints not being complete, experiments are difficult to set up and on top of that most scientists aren't keen on destroying their reputation by associating with mediums. But a few experiments have been carried out following some of the instructions, but they've never lasted for more than a few seconds before over heating caused them to fail - although not without some interesting moments just before.


Imbrogno explaining the renderings in detail accompanied by a chilled out Fagerstrom.

There is a lot more to DF than mere sketches, apart from them he supposedly has channeled sophisticated piano pieces, an obscure mathematical system and a collection of writings on Swedenborg's mysticism. The sketches alone, however, indeed raises a lot of questions; and until they've all been answered to a satisfactory level, the curious case of Dean Fagerstrom remains the enjoyable enigma it is ♣